Clubhouse and The Changing Nature of the Internet
Jaakko Tapaninen
Apr 1, 2021 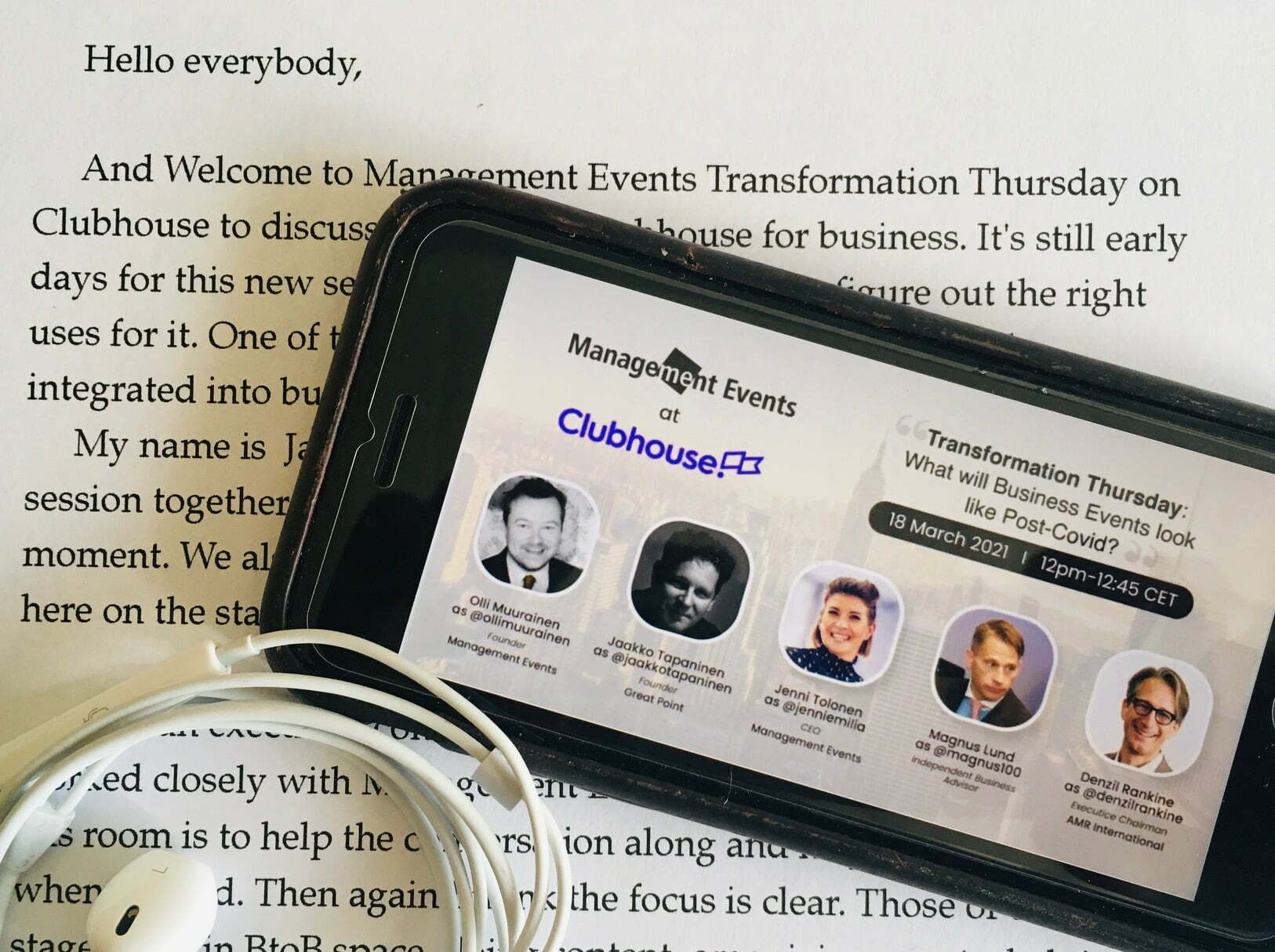 Just as podcasts had become mainstream enough to make Joe Rogan, an unlikely man of the moment, a multi-millionaire, and attract the likes of Barack Obama and Bruce Springsteen to start their own, along comes a new audio format and platform the spreads like a bushfire.

I am of course talking about Clubhouse. There’s no status quo in digital. Just constant experimentation, evolution, and oscillation. Clubhouse seems to provide all of these.

Since I’ve had a crush on digital audio, especially podcasts and audiobooks, for the last five years, I’ve of course been aware of the new app on the block. But it wasn’t until a client, Management Events, asked me to moderate a series of discussions on the platform, that I took a serious look. ME wanted to move fast and find out what the new platform is about and if it could be meaningful for them in the near future. The business of ME is invitation-only business events in 13 countries and it had to quickly reinvent itself during the pandemic as a digital-only events organizer.

Clubhouse could be described as an invitational audio-only podcast with an audience that can join in, or a moderated group call. What goes on is not recorded, so you have to be there or you’ll miss it. A Clubhouse room can be accessed through an app that, as of this writing, works only on iPhone and requires an invitation to join. This sounds a bit VIPish, but in practice, just about everyone knows somebody that can send you one. Clubhouse offers three kinds of chat rooms for its users: public (open to everybody on the platform),  social (your followers), and private (invitation only).

Management Events, deviating from its usual walled way of doing things, chose to hold three open rooms, one on hybrid business models, one on the future on events, and one on how to use Clubhouse for business. They were scheduled on subsequent Thursdays and branded as Transformation Thursdays.

The first one we did was a discussion between me and the CEO of Management Events Jenni Tolonen. The room (session) lasted for 30 minutes and was vivid and fun, but was mainly attended by the company’s employees. The main medium to spread the word had been LinkedIn. Folks tend to react to the whims of their bosses and colleagues.

For the next talk, a week later, ME invited event industry heavyweights, Denzil Rankine and Magnus Lund, on the stage to be interviewed. We also had Jenni up on the stage again and ME Chairman Olli Muurainen. Again LinkedIn was used to spread the word, but ME also sent out a bunch of emails to its stakeholders about the event. This time the turnout was much stronger and the discussion was rich and nuanced and ran for almost an hour. The international consultants had deep insights into the changing nature of the events business, and the leadership of ME shared experiences from the frontlines. The mix was good as well as the mood and we lifted some folks from the audience onto the stage to share their thoughts.

For the third one, we changed our tactics a bit again. Clubhouse is a club. The fact that you are invited matters, but also who you know. Again I shared the stage with Jenni and Olli, but also with Janna Salokangas as a co-host. Janna is a well-known moderator in the events business and has already managed to gather a following on Clubhouse. She brought in some of her following and also her experience of using Clubhouse for her clients. Later in the session, we had some of our audience join in for the discussion, and towards the end – of the again an hour-long discussion – we were jamming. The topic helped too: part of the Clubhouse culture is to talk about Clubhouse.

So after this short stint as a Clubhouse MC, what are my key takeaways? I have some Why’s, some How’s, and a few thoughts on What this all means.

WHY SHOULD ANYONE TRY CLUBHOUSE?

1. It feels so good to be in the same room with other people after all this isolation. There’s a real sense of being there and sharing.

2. You can build and revive relationships. Being in a room or on stage with someone is a conversation starter.

3. It can be a great tool for personal development. When you find the discussion that feeds your interests, the here and now experience enhances learning. And as with podcasts, Ted Talks, or YouTube videos, you have access to amazing knowledge for free.

4. It’s probably a great tool for community building. Again, the here and now experience makes all the difference. You can share your message with a group at once instead of wondering if they opened the email you sent a week ago.

HOW SHOULD I TRY CLUBHOUSE?

1. First roam around and listen to different conversations, maybe jump on the stage in a room a friend is hosting. Test the functions (they are super intuitive).

2. Once you decide to moderate a room, take your role seriously. You are the DJ responsible for the mood in the house. Audio is intimate, so you have to find the right balance between spontaneity and preparedness. Be friendly, a bit chatty, and even funny if that comes naturally, but keep in mind that people are there for a reason. See that they are rewarded for coming.

3. Always have at least two moderators. If you are the only moderator and your connection dies, your battery dies, or your mom calls, the room dies. To prevent the room from going cold, the other moderator can carry on while you work your way back in. And two moderators help the social aspect too. While the other focuses on content, the other can scan the audience for participants in the discussion.

4. Take your effort seriously. Prepare. Make your room a daily or a weekly event. Send out personal invitations to people you’d love to have in the room.

WHAT DOES CLUBHOUSE MEAN?

To me, the most fascinating thing about Clubhouse is what it tells us about where the internet might be headed. A fundamental feature, until lately, of the internet, is that it knows no boundaries and no time. Everything can be copied and everything can be accessed at any time.

Of course, there have been walled gardens and there are nations that limit access to content, but the core idea has been always been the always-on accessibility. The collateral damage of this has been broken social synchronization (we seldom consume the same content at the same time with other people) and devaluation of intellectual property rights (what do folks live on when they give everything away for free).

The rise of blockchains has brought scarcity to where we thought there was none. The internet is being re-invented as not just the internet of information but as the internet of value. Cryptocurrencies, smart contracts, and unique creative digital work (NFTs) are all forms of scarcity native to the internet.

Synchronization is a human and societal must-have. We are wired to want to share experiences, not just information, with other people. They magnify the experience and they build common ground for action. Societies need values that are expressed and rituals that are experienced simultaneously to stay glued together. When nightly evening news gave away to the cacophony of Facebook, we lost something very valuable and have only recently started seeing the cost and consequences of that.

I believe that the part of the fascination with Clubhouse is that it brings synchronization to where it’s been lost. All of a sudden, instead of checking our feeds when we feel like it, we have to be in the room at a set time with other people, or we will miss out on something forever.

Clubhouse the app may be here to stay or it may disappear in a whimper. But It should be followed closely, not just as a fad and as a startup of the moment, but as an indication of where digital might be headed.